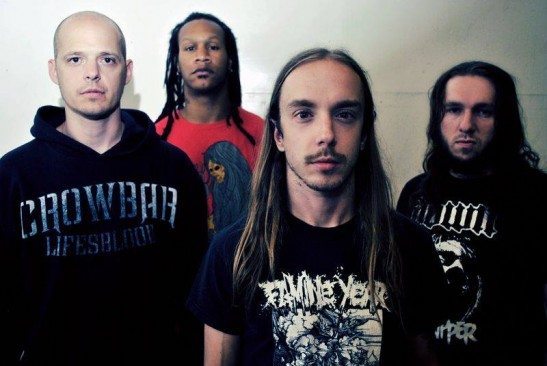 Interview: Cayle And Nick From Armed For Apocalypse

It was a fitting coincidence that I met up with Armed for Apocalypse guitarist Cayle Hunter and drummer Nick Harris only a few hours after the band’s campaign on crowdfunding site Kickstarter — begun the week before in a harried attempt to fund flights to Europe for a three week string of shows (including a UK tour with 36 Crazyfists and shows with Napalm Death and Hatebreed) — had met its $5,000 funding goal. The day was also something of a homecoming for the Chico, CA based quintet, who had only two days before returned from a grueling month-long US tour on the heels of releasing their highly anticipated sophomore record, The Road Will End on Ironclad Records in the US, and Candlelight Records in Europe earlier this year. But such skin-of-their-teeth turnarounds and triumphs have become something of the norm for Armed for Apocalypse, or A4A for short.

In the four years since making their debut on 2009’s Defeat, A4A has added a member - touring guitarist Nate Burman is now an official member alongside Hunter, Harris, vocalist/guitarist Kirk Williams and bassist/vocalist Corey Vaspra — made their way across America a couple of times, toured Europe with Sepultura and Crowbar, and took their sweet ass time crafting their recently minted follow-up disc. But the extra time spent on The Road Will End has paid dividends; the sometimes hodgepodge array of influences the band showed on Defeat has coalesced into a mature, diabolically heavy sound, seamlessly integrating sludgy downtuned riffs with haunting melodicism, with incessantly angry vocals layered atop of the whole mess. Over the course of an hour, we discussed the bands’ long-awaited return to Europe, the stark contrasts between national and international touring, and how The Road Will End might actually be just the beginning.