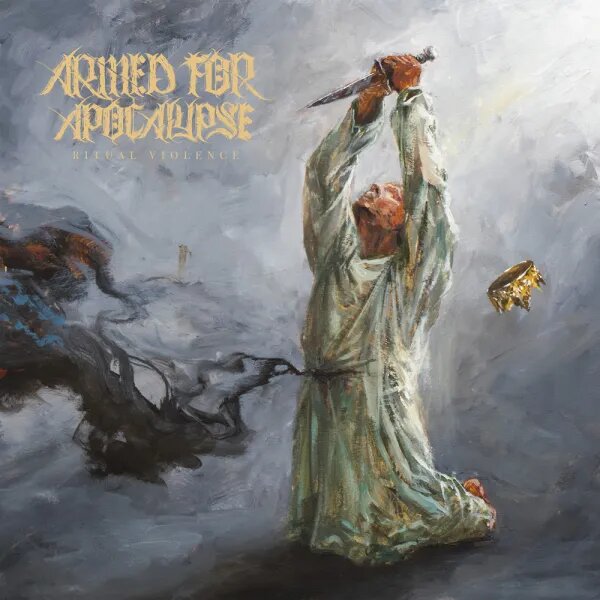 How to best describe what Armed for Apocalypse’s Ritual Violence (Candlelight Records) sounds like? While I’ve never had the pleasure, I imagine it’s much like jamming a knife into an electrical outlet. Not sure if that analogy will work for everyone. Well, it’s like witnessing the centerpiece car wreck from Quentin Tarantino’s Death Proof. Shit, barely anyone saw that movie. Just know that it’s abrasive and the average listener should approach with upmost caution.

While the music may come across like the soundtrack to a pile-up, it’s worth noting the sterling production and mix on Ritual Violence. And because of course it is this album was recorded with one Kurt Ballou over at God City Studios. The percussion, snare and cymbals in particular crack like thunder in high definition while the guitars rip like a well-oiled chainsaw. Meanwhile vocalist Nate Burman expresses himself in a manner that suggests that he will be needing all the lozenges you have at your local drugstore.

While they are labeled a sludge metal act (again, I for one think we could use less subgenres) the best moments in Ritual Violence are when Armed for Apocalypse dump the clutch and decide to go full speed ahead. ‘Fordoomed’ has more in common with You Fail Me era Converge than it does Mastodon and also features a lovely lead guitar cameo from Andreas Kisser. ‘Frail’ is another modern hardcore banger with tempos that only the most fleet footed will be able to follow in the pit and rounds things up with a breakdown that will have the average listener willing to fight upcoming traffic.

The only areas where Ritual Violence slightly misses is that just a hair too many of the songs are willing to sit around in mid-tempo instead of using a little experimentation, and with some of its vocals. But wait, we established that Burman sounds like a chain-smoking banshee? Yes, however some of the numbers here – looking at you ‘Suffer For A Living’ – feature too many words. It’s a somewhat common problem with extreme metal acts to feature vocals on every square inch of song as opposed to letting the composition breathe a bit easier.

Ever wanted to know what it was like to smash your thumb with a claw hammer? Ritual Violence can paint you the picture.