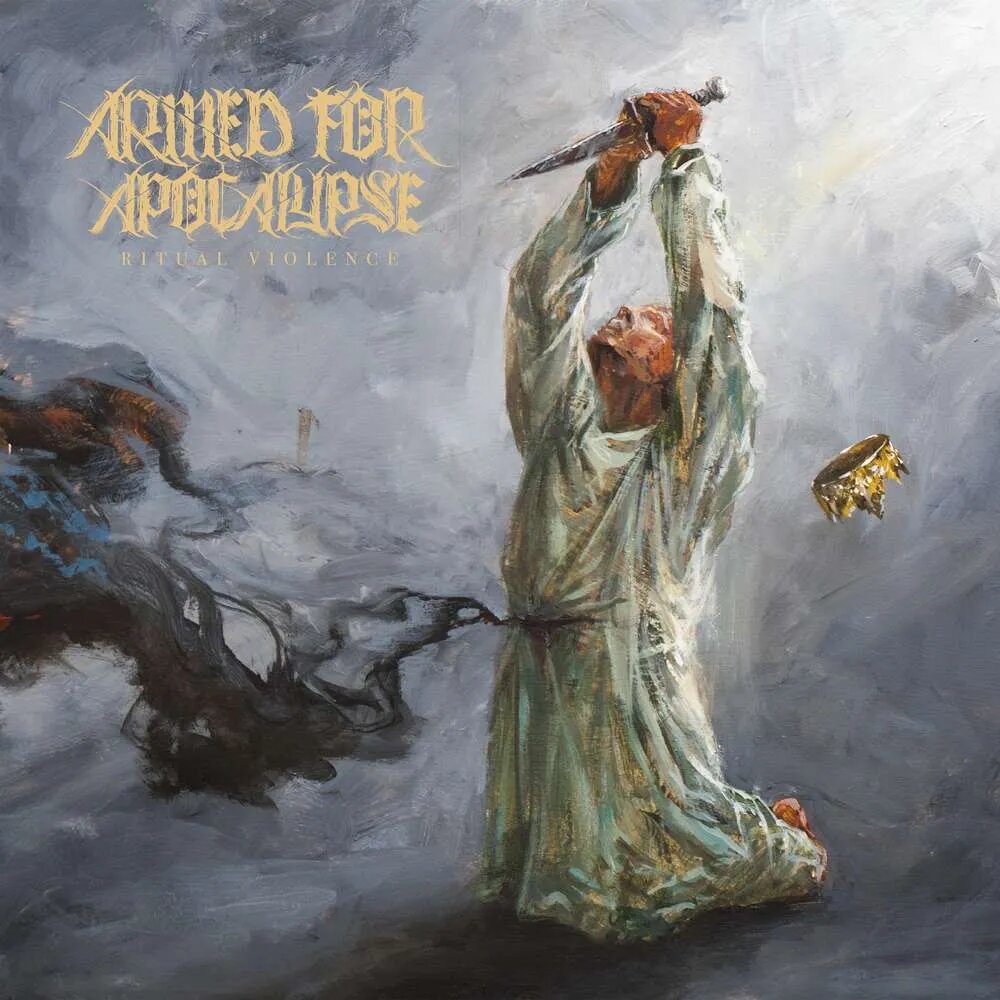 As a band that have been hustling for over a decade, Armed For Apocalypse channel their resilience to execute their ferocious style of sludge metal. This four-piece ensemble from Portland, Oregon have relentlessly followed their mission: to pummel the masses from one hemisphere to the other. And with their new, devastating album Ritual Violence dropping via Candlelight Records, guitarist Cayle Hunter and drummer Nick Harris are not shy about sending forth warnings about the barbarous reaction it produces.

With the sound production of Ritual Violence being massive and crisp, clean sludge, how was your experience working with an ideal engineer in Kurt Ballou? Did he play any part in song-structuring?

Hunter: Honestly, it was the greatest recording experience of our lives. Not only because it was with Kurt, who we have admired for years, but because we were able to lock ourselves in a studio for 10 days and focus exclusively on music. We’ve never been able to do anything remotely close to that before. It was like an extended slumber party with the best dudes ever.

Kurt didn’t play a role in song structure, mostly because we didn’t have the time or budget to make changes on the fly. The thing he did was make sure the songs we had were the best versions of themselves with the main focus being on the tones we got from each instrument and the performances from each individual. He was great at telling us which take was the “keeper” and which one we could do a little better.

We also used amps, cabs, and drums from his collection that we probably would have never picked out on our own, but they sounded so filthy! It definitely helped that we trust his taste in heavy music. We knew whichever way he pushed us was in the best interest of the record. I can’t overstate how valuable that is.

How did the cameo appearances by Andreas Kisser and Trevor Phipps come together?

Hunter: I know it sounds weird to say this because he is such a legend and his band (Sepultura) has done so much during their career, but Andreas is one of the most underrated guitar players in metal. He’s got chops and a sound that is uniquely his; he’s a riff machine whose catalog is overflowing with bangers, and he still crushes it live every night.

Years ago, we were lucky enough to tour with Sepultura and Crowbar throughout Europe. Both bands were and still are massive influences and heroes of ours. When we became true friends with those people, it was surreal. When we were writing the song “Foredoomed,” it has this thrashy section in it we used to call the Sepultura part, so I reached out to Andreas and told him it would be an honor for us if he played one of his patented solos on it. In true Andreas fashion, he went out of his way to record it on his own and send it back to us. And it’s perfect.

No one has done more for our band than Trevor Phipps (Unearth). He was the first person to truly believe in us. We put our first two records out on his label in North America. He helped us get on tours with Unearth and other bands. He would talk us up in interviews, wear our shirt whenever he could, and introduce us to booking agents and managers. When we confirmed that we were recording with Kurt near where Trevor lives, we reached out immediately. It was a very cool full-circle moment. Oh, and he absolutely KILLED IT on the song (“Suffer for a Living”).

Ritual Violence is your first full-length album with Nate Burman on vocals; was it intentional for him not to stray too far vocally from former vocalist Kirk Williams—that balls-out, monotone squawk?

Harris: When Kirk left the band, we all pondered who would fill the void. I remember sitting outside in Santa Barbara chatting with Nate on the phone, and I was stressing about it. Then Nate simply said, “I can do it.” I remember instantly thinking Nate is a BAD ASS vocalist! My old band would play with Nate’s old band, and he was a free-handed frontman that KILLED IT! I was a Nate fan! Nate was already doing backup vocals for a couple of years with us. I called Cayle and told him about the conversation I had with Nate, and we both laughed. It’s like we already had what we’ve been searching for!

From there, it was a smooth transition for Nate. He didn’t need to model Kirk’s voice; he already had his own voice, and it was BIG! Of course, he is singing the old songs that Kirk wrote vocals for, but he does it in his own way, and we have never given him any type of instruction.

Our first set of shows with Nate on vocals was with Unearth, and Trevor Phipps loved it! The next round of shows with Nate at the helm were with Crowbar. I quote, in the classic (Kirk) Windstein voice, “Equally as good, young rocker!  Equally as good!” Nate’s confidence was there, and he took it all and made it his own! I used to joke with Nate and say, “You have the game ball, dude! You lead, we will follow.”

Ritual Violence has a darker tone than your past releases; what other novelties can fans expect from the new album?

Hunter: We are really excited about all of the ground we got to cover on this record. We have some big epic pieces. We have some parts that are built to start human-cyclone circle pits; there are pile-on parts that we hope people will scream along with Nate until their throats rip out, and, of course, there are the big, slow, sludge songs that we love so much. Our goal was to make a record we would be proud of for the rest of our lives. Our method to achieve that was to include all of the styles we connect with, then cover them all with a dark, filthy blanket.

I saw in a recent interview you guys moved the band’s base to Portland, OR; Would you mind explaining what prompted the move?
Hunter: For a while, we were literally living all over the world. I was in Chico, CA; Nate had moved to Portland, and Nick was in Spain. Incredibly enough, we were still writing and recording songs when Nick would visit the States, and the band would still do small tours, but the working conditions were obviously not sustainable. In retrospect, I think that was the darkest time for us as a band.

We were still great as friends, but I don’t know if any of us truly believed we could continue at the level we require of ourselves. Nick is a relentless optimist, so he was the one keeping our dull heartbeat pumping. Nick also had a bit of an awakening when he was in Spain; he got 100% sober and decided he wasn’t getting what he wanted out of music because he wasn’t giving it everything he had. Our old bass player, Corey (Vaspra), quit, so Nick moved to Portland to be closer to Nate.

We needed a new bass player, and we found the perfect guy in Charlie (Fischer), who also lives in Portland. It all happened very quickly, and the next thing you know, the band was touring more than we ever had before (over 150 shows in 2019), starting from scratch, eating shit, (and) paying our dues.

As a band that have been active for over a decade, what is one valuable lesson you’d pass down to startup bands as far as what to expect when trying to succeed in a grueling, non-mainstream genre?

Hunter: If your goal for being in a band is popularity, you are going to struggle with long-term happiness. Popularity is fleeting. Music is timeless.

Be grateful you have the gift of music. Be grateful every time you get to play your music with your friends. Be grateful any time one single person enjoys the sounds you make. The amount of people in the audience will rise and fall. The amount of attention you get will swell and fade. The faster you can detach your happiness from those variables, the happier you will be.

Is there a tour in the works in support of Ritual Violence? What band or bands would you guys love to hit the road with?

Hunter: The only reason we write and release music is to tour. Playing live is what brings us the most joy as musicians, so we hope this record is good enough, and (received) well enough to allow us to tour on it for a long time. We can’t announce anything as of yet, but things are certainly in the works!

There are so many bands we would love to play with and they run the entire gamut of heavy music: Primitive Man, END, Converge is a big one we haven’t checked off the list yet, Crowbar (always), Conjurer, Napalm Death, Cannibal Corpse, Hatebreed, Sepultura, Unearth, Knocked Loose, Revocation, Havok, Fit For An Autopsy, Eyehategod, Lamb of God, Metallica, and Slipknot because we love small club shows.

As a former touring nomad myself, I’ve gotten into some crazy predicaments on the road. Can you describe one sticky situation or adventure on tour that the band had to navigate?

Hunter: The one that always comes to mind instantly for me is when we were driving from California to Oregon on the busiest highway on the West Coast. We were in our crappy van when we heard a massive “BOOM!” One of our tires basically exploded as we were driving 65 miles per hour. We started spinning in circles, and when we finally came to a stop, we were facing directly into oncoming traffic. Our lives flashed before our eyes!

Miraculously we didn’t hit anyone; no one was in danger of hitting us, and most importantly, we were completely unharmed. (It was) one of hundreds of vehicle problems we’ve endured over the years, but we didn’t care. We were alive!